The Most & Least Affordable European Cities To Buy A Home

Now lockdowns across the continent are gradually lifting, we can safely start thinking about crossing borders again. Have you ever wondered what housing prices in Europe’s capitals are like?

A study by CIA Landlord Insurance did some digging and indexed all major cities based on their average prices for buying a home in an effort to determine which are the cheapest, as well as the most expensive.

The Top 10 Most Expensive Home Locations In Europe: Paris Revealed As Priciest

Our research found that the highest average price of a house in Europe is actually not in London, as many would expect. It is actually the French capital of Paris that takes the title of the most expensive European city to buy a home at an average of a staggering £534,226.88. Despite this, about 65% of the French own their homes.

London does however come in second place. A house in this English metropol will set you back £500,310 on average, which is an eye-watering £11,092 per square meter. It comes as no surprise, with housing prices climbing year on year, that it is expected that by 2025 about 60% of Londoners will live in rented accommodation. A one-bed flat in the city centre of London costs £1,666 per month on average, or £1,253 if you’re renting outside the city centre. Based on the average price of a house and income, it would take an estimate of 40 years to afford a house in the UK.

Following suit is Luxembourg, where a house carries an average price tag of £480,027. This comes down to about £9,678 per square meter if you are looking for a house in the city centre, or about £7,073 per square metre outside the city.

The Top 15 Cheapest Cities To Buy A Home In Europe

Our study also found the 15 cities in Europe where it is a little more wallet-friendly to buy a house. Moldova ranks first, with the average price of a house under 50k at £49,673, or £831 per square metre in the city centre and £543 outside the city respectively. Paired with an average monthly bill of £84 for basic utilities, Moldova is an incredibly affordable place to live.

For a few thousand pounds more on average, one can buy a home in North Macedonia, where a vast majority of nearly 89% Macedonians owns their home. Here the average price tag of a house comes down to £56,516, which is roughly £1,079 per square metre in the centre of its capital Skopje, or £771 outside the city. 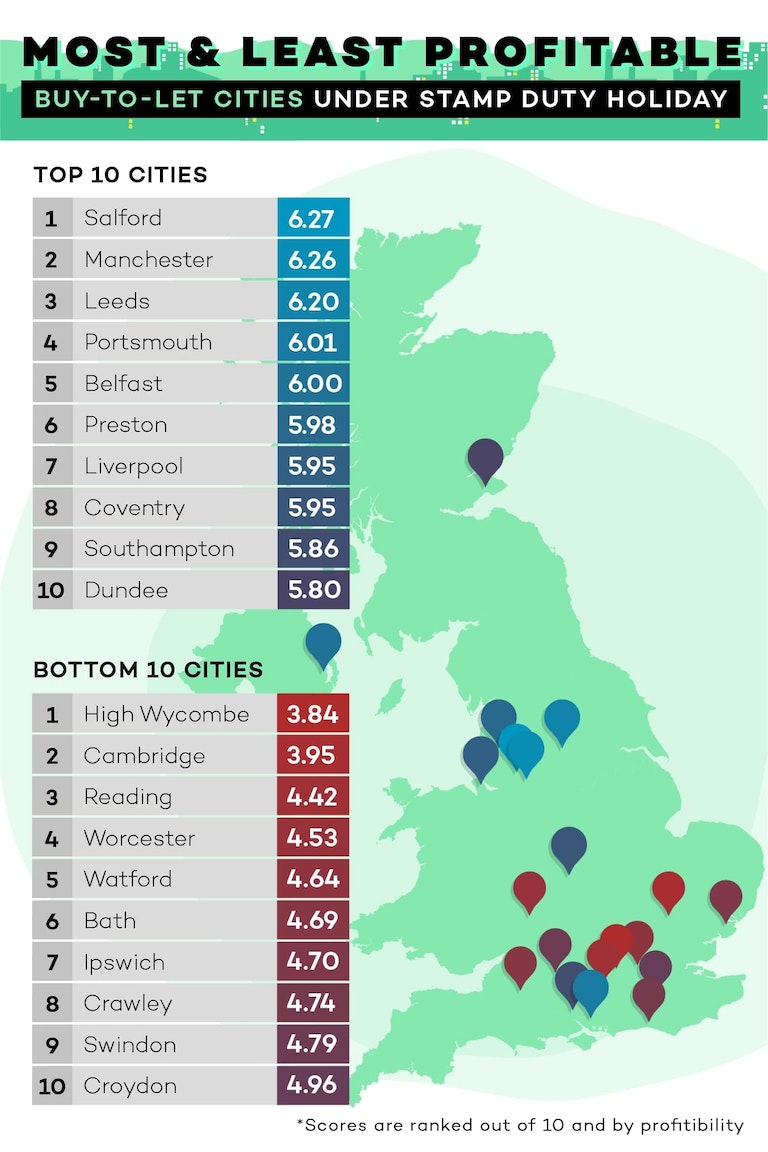 The third country offering bargain homes is Bosnia and Herzegovina, where a house will set you back £66,064 on average. 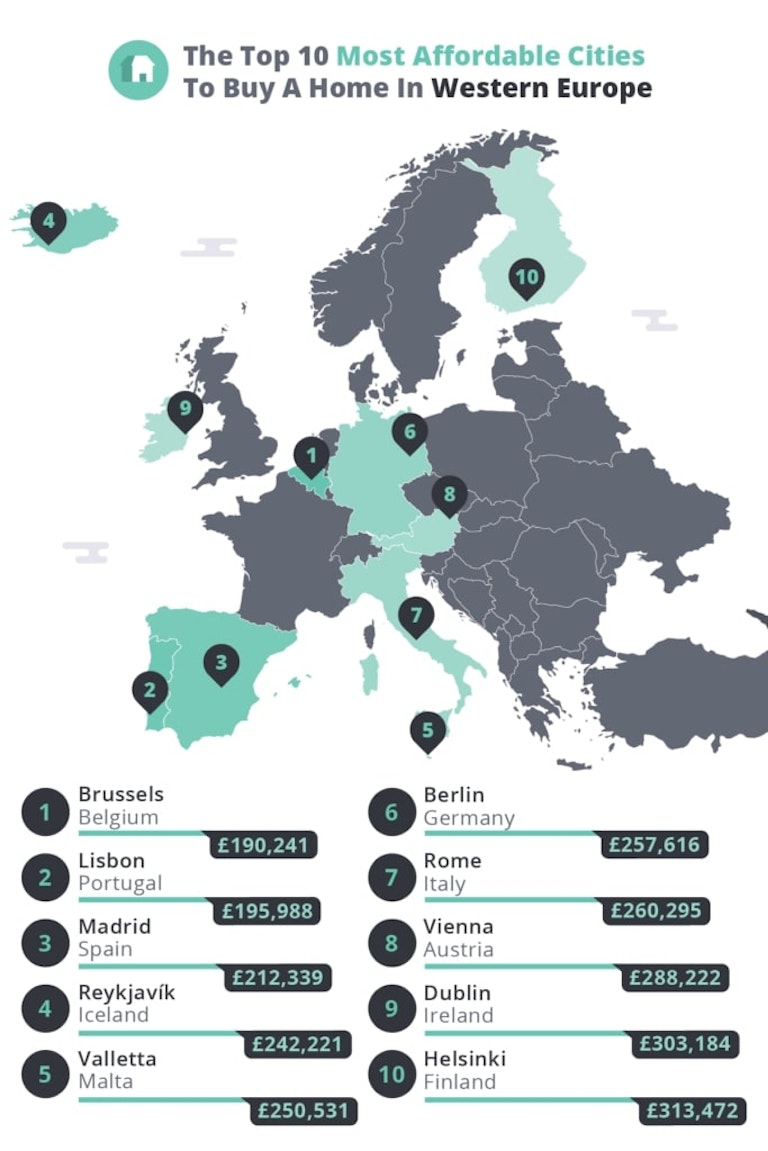 When looking at just the popular western European cities, the Belgian city of Brussels comes out as the cheapest place to buy a house. For just £190,241 on average, you can live in the heart of the European Union. This comes down to £3,148 and £2,550 per square meter respectively, and with an average monthly bill of £144 and the low cost of living, this metropol turns out to be a very budget-friendly place to live. Based on the average price tag of private property and income, it would take just 23 years to buy a house in Brussels.

The second cheapest city to buy a house in Western Europe, is Lisbon, the capital of Portugal. This British holiday favourite offers homes for an average price of just under 200k at £195,988, and with an average cost of living of around £1,000 per person per month, it's super affordable to relocate to the Portuguese sun for a permanent vacation.

Not far off from Portugal and another British holiday classic is Spain, which ranks as the third-cheapest country in western Europe to buy a house. A Spanish home will set you back £212,339 on average, or £4,273 per square metre in the city centre and £2,638 outside the centre.

It Takes 76 Years To Buy An Average Home In Malta

It’s a rule of thumb that we shouldn’t be spending more than one-third of our net monthly income on housing. With this in mind, how long would it take with an average salary to buy an average home in Europe’s capitals?

Malta takes first place by a landslide. With an average salary after tax of just £823 and house prices being non-reflective of this, it would take 76 years to pay off a home.

Following suit is Russia. Whilst a home priced at £184,292 doesn’t seem like much from a UK perspective, with the average Russian income of just £728 it becomes a lot less affordable. Based on these numbers, it would take you about 63 years to call the house yours.

A national British favourite, Portugal, is not at all affordable either. Portuguese homes carry an average price tag of £195,988, which on an average salary of just £848 after tax each month, would take you 58 years to pay for. 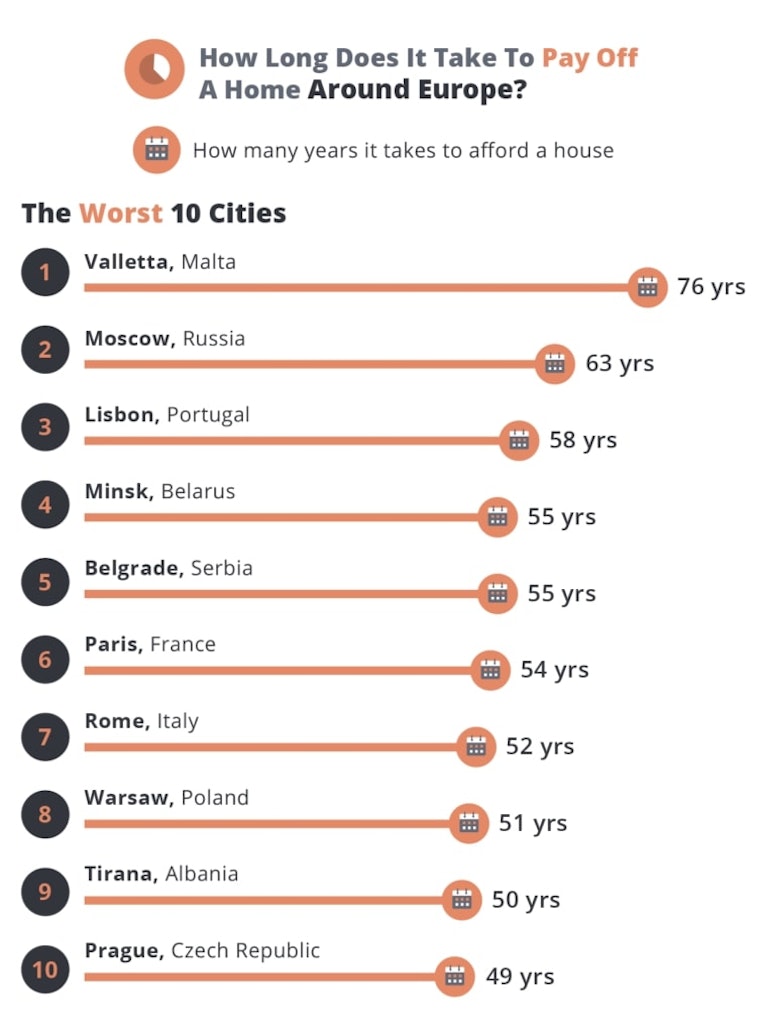 It Takes Just 21 Years To Buy A Home In Switzerland

It’s a rule of thumb that we shouldn’t be spending more than one-third of our net monthly income on housing. With this in mind, how long would it take with an average salary to buy an average home in Europe’s capitals?

When thinking about European countries where homes may be most affordable, Switzerland is likely the last place you’d think of. With house prices being relatively low at an average of £353,194 whilst simultaneously having rather high average incomes of about £4,140 after tax a month, owning a home here becomes a lot more realistic. Based on these numbers, it would only take about 21 years to purchase a house.

Another very affordable place is at the heart of Europe: Belgium. Here the average home goes for about £190,24, which on the average net income of £2,105 would take a modest 23 years to pay off. 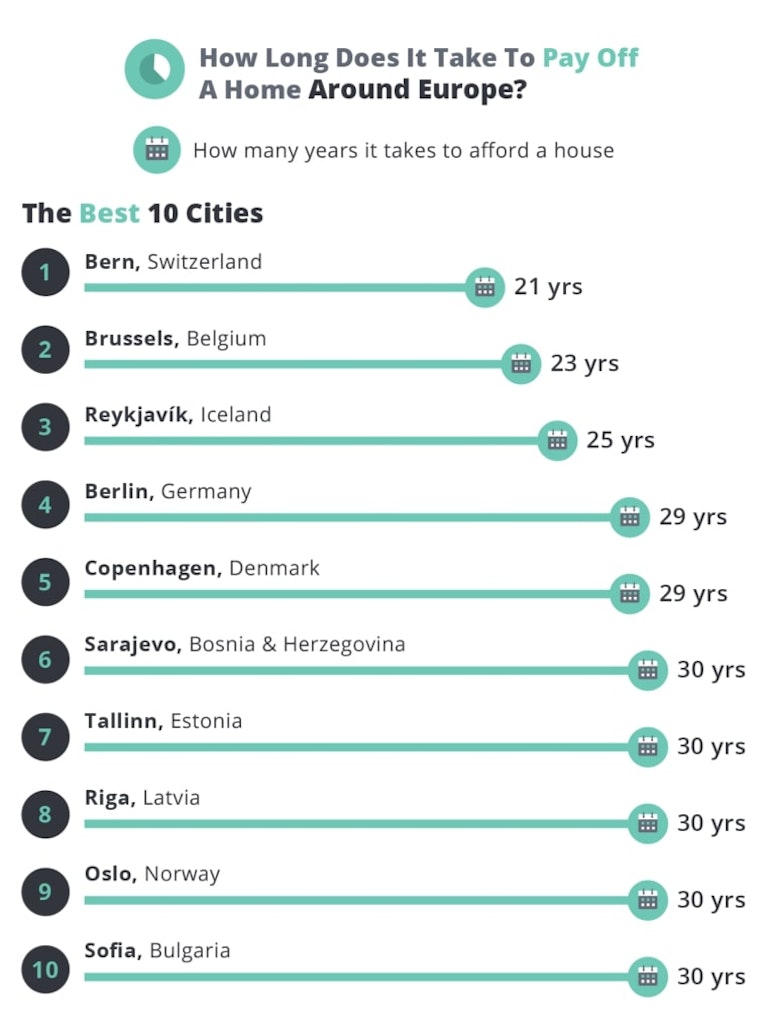 All European capital cities were included in our study. March 2021 used as the latest date for house- and cost of living-related prices.

An average of all housing-relevant prices in London excluding the full price of a home has been used as an index. The house price was divided by this index to give a factor. This factor was then multiplied by the equivalent indices for all other locations to give an estimated housing price.

* Based on an average of all housing-relevant prices in London excluding the full price of a home has been used as an index. The house price was divided by this index to give a factor. This factor was then multiplied by the equivalent indices for all other locations to give an estimated house price.

** The length of time it would take to buy property is based on the average price of a house divided by one-third of the average net monthly income, which is the standard portion of income that is generally contributed to the cost of housing.