Amongst the stamp duty holiday buying frenzy pushing house prices to an all-time high across the UK, where are the most profitable buy-to-let hotspots for landlords looking to invest?

In this study, CIA Landlord reveals the cities with the cheapest average house prices compared to the average rental cost to uncover the best cities and house types to invest in before stamp duty holiday ends in March 2021.

Take a look at the top cities here:

Salford Ranks As The Best UK City For Landlords Buying-To-Let! 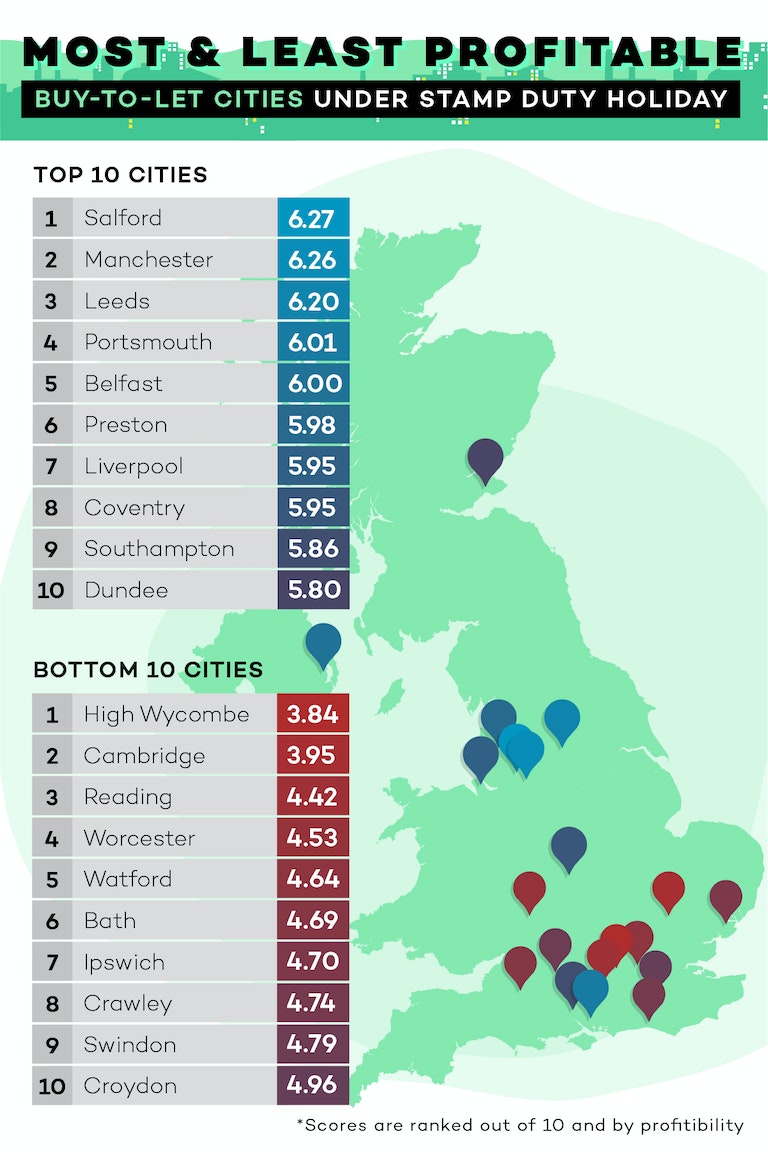 For landlords looking to buy a new property with a means to let out, our study shows Salford to be the best city in the UK. With an average house price of £173,311, properties are affordable in the area and as average rent prices are in the region of £1,052 per month, it proves to be extremely profitable too. With the stamp duty holiday announced in the UK, you can also be looking to save almost £1,000  when purchasing a property here!

Conveniently, close to Salford, Manchester ranks as the second-best city for buy-to-let hotspots for landlords. House prices average out at an affordable £193,681, and with rental incomes averaging £1,141, you can also expect to save £1,373 in stamp duty savings! Leeds, Portsmouth and Belfast follow closely behind with house prices ranging between an affordable budget of £100k-£250k with rental income reaching over £2,000 per month!

The Top 10 Cities For Landlords Buying-to-Let

High Wycombe ranked as the worst city for those looking to buy a house with the aim of letting. With average prices hitting £430,891, the area is certainly an expensive one. With rent prices averaging a comparatively low £945 per month, the profitability margin is very low, meaning it’s worth avoiding the city if possible.

Despite being known as one of the most beautiful cities in the UK, Cambridge isn’t a city you would want to invest cash in either - with house prices averaging £448,432 whereas rental income averages a mere £1,080. The UK cities you should also avoid investing in include Reading, Worcester and Watford, all cities have low rental incomes compared to house price averages which almost reach £500,000!

The 10 Worst Cities For Landlords Buying-to-Let 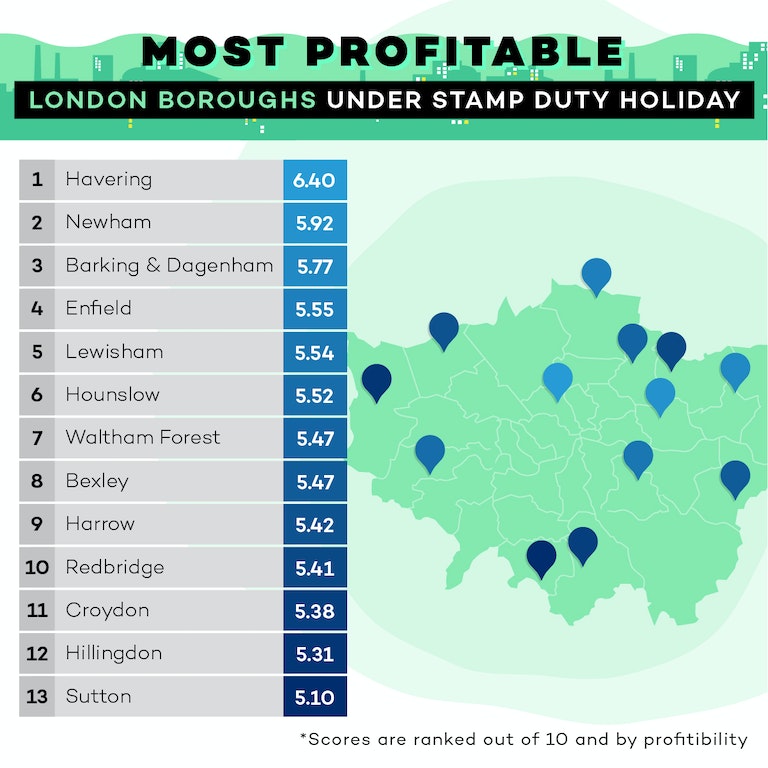 For those living in London, buying a property can seem like an extremely unattainable dream with the average price tag for a home in the capital commonly topping the million-pound mark. However, with remote working taking over the capital, there are actually 13 boroughs where average houses prices fall below the £500,000 mark, allowing for an attractive pot of stamp duty savings too, within an area that is a perfect commutable distance into the city.

The study revealed that Havering was the best borough for profitability, with house prices averaging at £395,832 and monthly rental prices reaching a high £1,895. Under the stamp duty holiday, you can also expect to save more than £9,000 when buying the property!

Newham, Barking & Dagenham and Enfield follow Havering, with house prices averaging between £300k-£400k. With the average monthly rent price for all the top London boroughs surpassing £1,000 per month, landlords in the capital that look to invest further out of zones 1-3 will certainly reap the rewards.

With average house prices reaching over £2 million, Kensington and Chelsea (5.46 out of 10) ranks as the least sensible buy-to-let hotspot amongst the current stamp duty holiday. Whilst just as profitable as Bexley (5.47 out of 10) or Waltham Forest (also 5.47 out of 10) why not avoid the hefty price tag and opt for a borough that returns the exact same in proportional investment at just a fraction of the price?

Bromley, Haringey and Ealing follow as the second, third and fourth-least business-savvy options with the exact same profitability ROI as Barking & Dagenham (£302,060) or Enfield (£399,517).

This being said, if you a couple million spare to invest and are just looking for the most profitable borough disregarding stamp duty savings, Westminster, with a profitability score of 8.04 out of 10 is your best bet. This is followed by Southwark, Lambeth, Brent, Wandsworth, Hammersmith, Barnet and Camden, where no other borough below £500,000 comes near these areas' return on investment margin (scores ranging from 6.56 to 8.04 out of 10).

The Most Profitable Buy-to-Let Hotspots Based on House Size 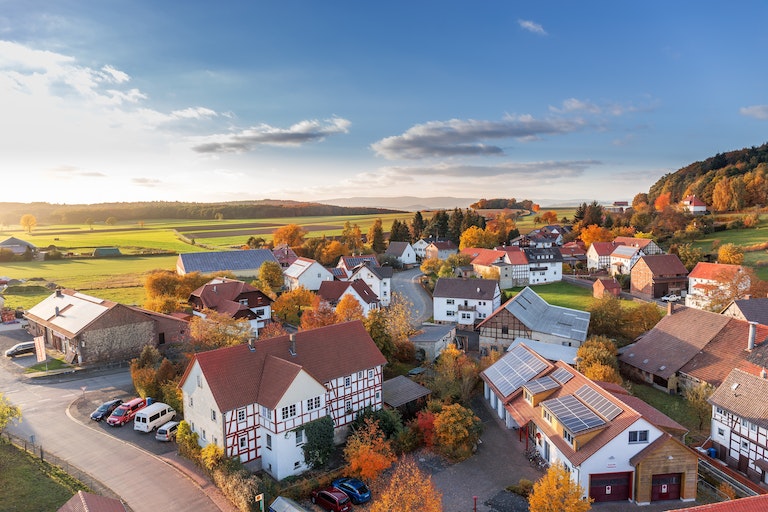 If you're a landlord looking to invest in a specific house type for families, couples, professionals or students, the study also revealed the best areas to invest in based on the number of bedrooms you're looking to buy:

In order to calculate the best cities for buy-to-lets under the government's latest stamp duty holiday, we analysed the average house price, rent price and stamp duty savings in every UK city for the cheapest home prices with the highest rental yield in order to calculate profitability. We also examined the average rent and house price by the number of bedrooms across the UK to reveal the most profitable areas by home type.